Excerpt – Up Bow Down Bow

When I received the instrument interest form, with its single question—Which instrument would you like your child to learn?—and limited multiple-choice answers, I thought He’s not going to be able to do any of these things, so why are they even bothering to send this to me?

Waves of frustration washed over me. Throughout my years with Alex, I’ve marveled at my youngest son’s abilities, joys and radiant spirit, but that doesn’t mean I don’t feel frustrated when he can’t do the things his peers seem so easily able to accomplish. I’m never sad about my son’s limitations for me, but I do want him to experience a wider, more expansive life, and reminders of what he can’t do make me sad and angry. The form felt mean.

Alex didn’t walk—yet. Or talk—yet. He found it challenging to hold a pencil. There was no way he’d be able to join the orchestra.

My heart sank, and then it soared. What if Alex could experience even some small measure of music? What if he could learn to play? Here was the opportunity for a new experience, and I didn’t want my youngest deprived of anything.

Josh played the cello. I played, and still sometimes play, the cello. I wished Alex could play the cello. So, I pushed down my doubts. I filled in the box marked “cello.”

Another form showed up the next day. It instructed me to rent a quarter-size cello.

Really? Well, here goes. I rushed to the Music and Arts store in Wayne, Pennsylvania.

“I need a quarter-size cello, a bow, some rosin, and Suzuki book one,” I told the young man behind the counter.

He wrote Alex in big black letters on a tag and attached the tag to the soft instrument case. I thought about the letters we’d hung on my third son’s bedroom door, even before bringing him home from the hospital, and smiled at the inner acknowledgement of how our lives with Alex had far exceeded our expectations. Alex had exceeded our expectations. But, as I left the music store, clutching Alex’s instrument to me, I was far from confident.

The pictures were sent to me of Alex taking his first lesson with his cello teacher, April Beard. How did that happen? How did I move from uncertainty to unshakeable faith? April Beard.

April is the embodiment of all I had hoped for in a teacher. Not just for Alex, but for me.

Up until the pandemic, she sent me a weekly multi-paragraph emails about pizzicato, piano plucking with a soft dynamic level, bow hold­ing, CelloPhant™ vs. no tool, Alex’s attention span, percussion, music, and more. (After the pandemic hit, I became Alex’s cello helper, so there was no need for these ongoing email updates).

To get emails about our youngest son’s progress filled me with a joy that cannot be put into words. Each week, after receiving April’s email, it could take me a day to respond. I remained that blown away, my doubts eviscerated by awe and gratitude. Since being blessed with the gift of my youngest son, I have felt as if I’ve often had to fight for him to gain access to the same rights and opportunities as his fourth-grade peers. But, with the cello, Alex is just like any other fourth grader.

April perfectly balances how to challenge Alex, yet meet him where he needs support. She turned the instrument toward him so he could see and hear. As a result of her tutelage, my son, who others doubted could ever learn to play an instrument, let alone something as intricate and majestic as a cello, can play percussion, do bouncy bowing, and so many other techniques that astonish me.

April accepts the level of learning within Alex’s current reach while inspiring him to expand his skill set in increments. As a result, Alex is learning. He is also cultivating a love for music. I see this experience as setting the stage for our youngest son to touch the stars. And I marvel at what a miracle he is.

As if the photos and emails were not enough, April added to Alex’s visual and textual records by beginning to video her lessons with him. Each video she sent gave us all hope and joy. I remember a day, 15 weeks into Alex’s lessons, when I watched him, courtesy of one of these captured moments, and had a striking realization; Alex was progressing not just as a performer but as a person.

Alex has learned a ton about notes. He has experienced stylistic variations. His cello teacher isn’t simply teaching him how to play. She is helping him understand that he can do things he never imagined 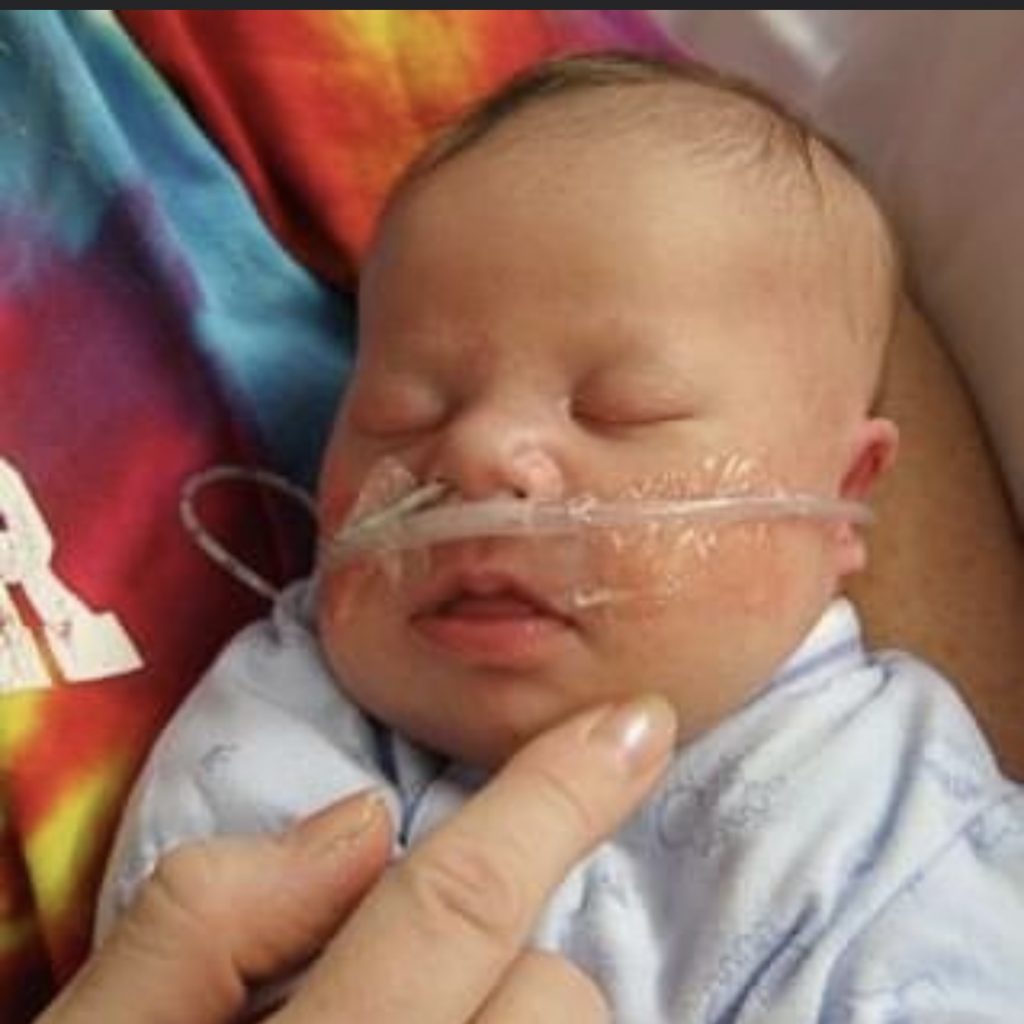 Alex was in the Bryn Mawr Hospital NICU (Newborn Intensive Care Unit) for one month after he was born.

possible. He can learn. This teacher’s teaching has been magic. It has illuminated the intelligence we have always known Alex possesses. As a result, he is succeeding in ways I never dreamt possible, ways the world told me he never would.

At the time of Alex’s birth, there were many people who told me not to have expectations for him. They said things like “I’m so sorry this happened to you,” “You’re going to put him in an institution, right?” and “At least, you have Josh and Sam.”

They treated Alex’s birth like a death and couldn’t see all of the wonder and beauty that Alex would bring to our family, and, also, to the world.

Each year since then, although most of Alex’s young life has been full of loving, positive people, I’ve found myself suddenly in situations where it feels as if other people are trying to reduce my expectations of my son. These seemingly well-intentioned people want to make Alex’s life smaller. Not April. I watch, enthralled, as April issues an instruction and my youngest son takes his entire body and lifts it up higher to show he understands. An A string sounds higher than a D string.

Every time I watch Alex play, my mind wanders through a maze of memories and I find myself tearing up at the beauty and brilliance of 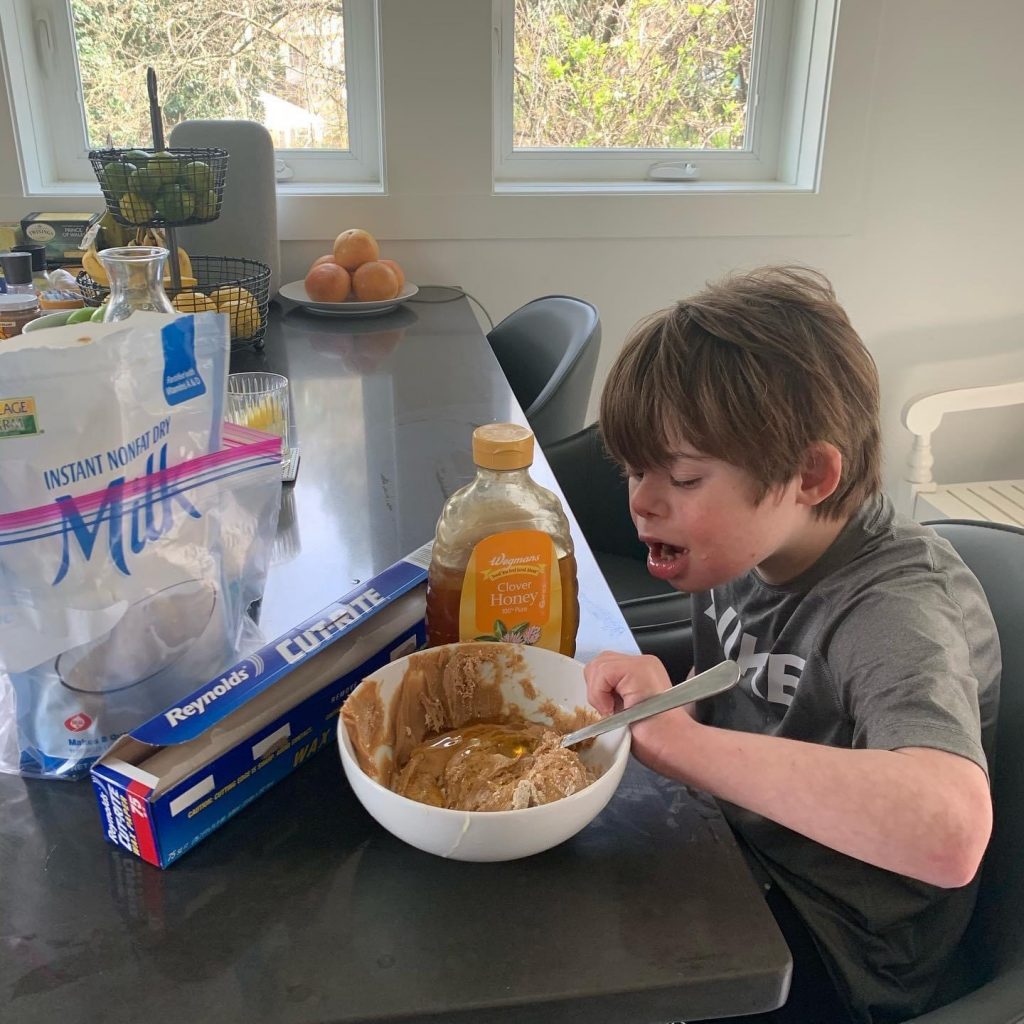 my youngest boy. Alex’s experiences with the cello have translated into other areas of his life. Since starting the cello, his pincer grasp is better, and his grasp on life itself seems to have strengthened. He has started holding objects more at home. He looks at me with a newfound confidence and poise. It is as if, when he sees me seeing him, we both recognize that something has changed. He has an increased awareness. His sense of self and purpose have grown.

Seeing Alex respond to the notes and chords of his newfound learning fills us all with a desire to sing just as he fills our life with daily music simply by existing.

It is so cool Miss Beard turned the cello toward me! I can see all the strings and she showed me how to get a great sound from the D string and the A string. I love this. I feel so smart and unique. I always wanted to have cello lessons. I remember Mom played the Suzuki variations of Twinkle Twinkle Little Star, and each time she played, it made me want to play too. 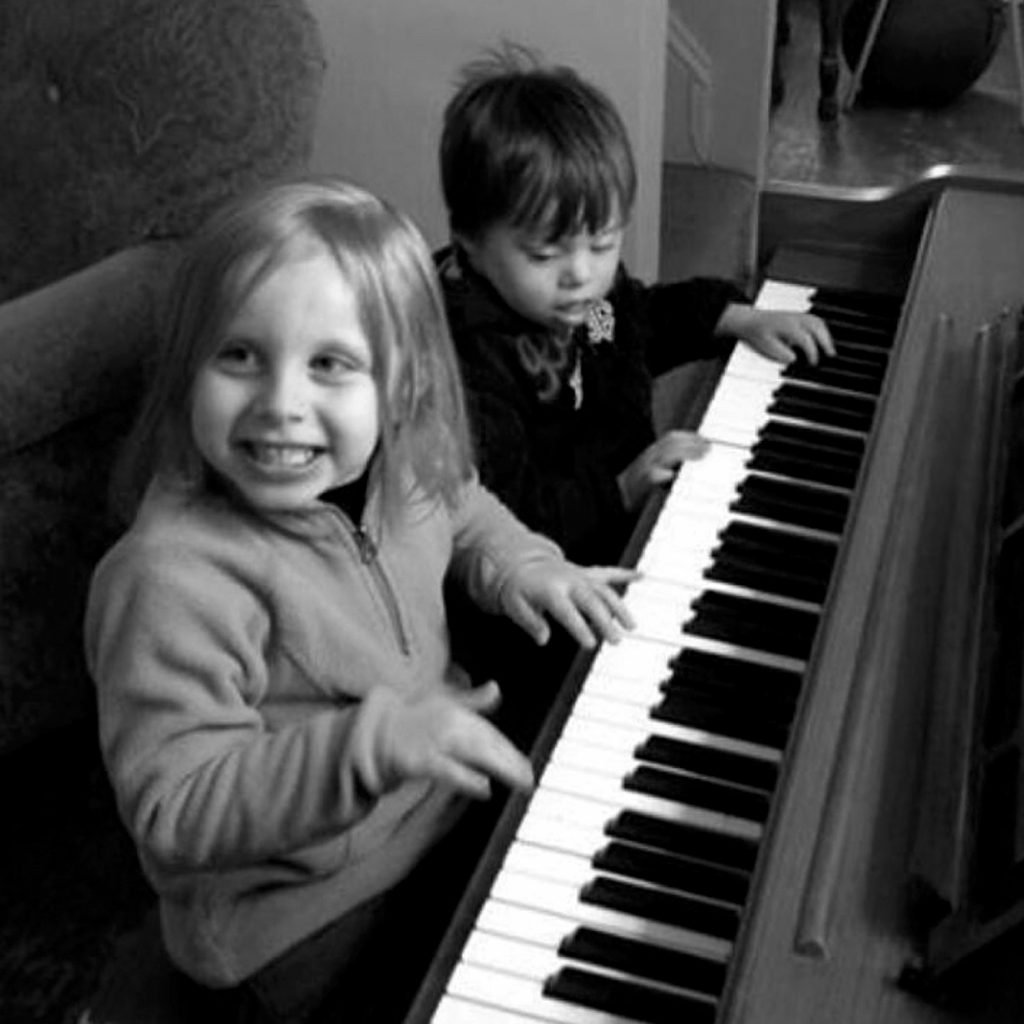 Alex playing the piano with his first friend, Fiona. They met at age four months, and are still friends at age twelve.