Excerpt – Up Not Down Syndrome

Excerpt from Chapter One: “Shock” 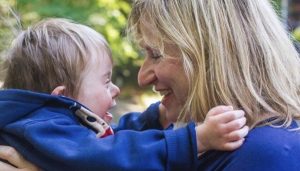 Despite its difficulties, this labor was the easiest of all three boys. Well, maybe not the labor. That was hard. But, with Josh and Sam, the delivery was excruciating. It took forever, and the pushing was agonizing. I almost couldn’t bear it. With Alex, all that was required were a few pushes, and he was out.

His shoulders were out. He was on my belly.

Internally, I danced. I realized that, externally, something was terribly wrong. The nurses took him from me. Suddenly, a quiet deafening fell over the room…like first snow. Ten years later, as I edit this passage, it is snowing outside. I’ve come to understand that the tranquility that precedes what we view as a storm can also be nature’s quiet acknowledgment of a new, innocent beginning. I’ve come to understand a lot about the wonder of the unsuspected, and sometimes inconvenient. But we cannot know life’s later lessons in the moment. We can only be where we are.

My heart went into freefall. It landed, with a thud, in my gut.

What was going on? I was desperate to know, and, at the same time, I didn’t want to. I wanted to keep dancing. I wanted to bask in the accomplished glow of afterbirth.

Dr. Crate reached for my hand. Held it. “His ears, eyes, and neck are characteristic of Down babies.”

Down what? As I tried, poorly, to process the word, it felt as if the doctor were speaking from miles away. I strained to listen through the distance. Facts. Figures. Intermittent words. Statistics. A wave of fear¬ful questions.

I wondered about all of those weeks lying there, getting ultrasound after ultrasound. Did the doctor know ahead of time that something was wrong with my third son? If so, why hadn’t he told me? I’d thought all the additional monitoring had to do with the fact that I was forty—an advanced maternal age—and, therefore, needed closer supervision.

Supervision. I would have to look after, a baby who was…. My mind roved its recesses for a way to think about my third son, but I had not yet acquired the language to explain.

Trisomy 21 is Alex’s diagnosis. The medical designation refers to a chromosomal anomaly that causes a distinctive set of physical characteristics and lifelong challenges. Trisomy 21 impacts approximately 5,000 of the babies born every year. I didn’t know that then. I didn’t know so many things. I felt like the only one in the world with a child who would fail to live up to all the hopes and dreams I’d had for him.

How could I love an imperfect child? How did my body produce this unlovable baby? How could we live our lives in the face of this soul-crushing information? I was devastated. I didn’t know how to continue living when all my dreams for my youngest were slowly withering within me.

This son would not be cute. He would be the opposite. It must be Michael’s fault for using cannabis. That conviction led to our biggest argument. Ridiculous now, thinking back.

It’s especially ironic considering that, years later, after Alex was diagnosed with epilepsy, I would fight to get his neurologist to agree to treat him with medical marijuana oil, instead of pharmaceutical drugs.

Sadness was like quicksand, pulling me downward. But then I had a sudden, unexpected, thought. I remembered a boy from my teaching job at Wayne Elementary School. An adorable, intelligent, and amazing young boy who had Down syndrome. The entire previous year, he’d stopped by my room to say, “Hi, Mrs. Schwartz!”