Home Travel Scenes From India  (As seen through the eyes of my oldest son, Josh)

Scenes From India  (As seen through the eyes of my oldest son, Josh) 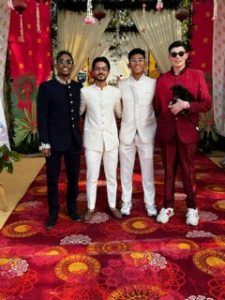 I remember when Sam my middle son, jumped from the couch exclaiming that Cinderella was, as said in his three-year-old voice, “She’s SO shiny.” I remember Sam putting my Dansko red clog on his foot and tripping cause it was too big. I painted his toenails purple cause he wanted to see how it would look, since he saw my purple toenails. Josh picked up pumpkins bigger than he was in each hand as a two-year-old. When my mom-in-law said that a driver cut her off in his three-year-old voice he asked her what the word was she said, “jerk” She explained to him it is when a driver is not nice. Josh said oh my mommy and daddy call those, “———.” I laugh still about this.

Josh would have adventures in our attic with his beautiful iridescent green blankie, his Grandma Sandy made him. Blankie was so loved that it became smaller and would be lost in our attic on one adventure for three years. That was rough. Alex went to school the other day with a silver necklace that Josh gave him. He looked SO teenagery. They will always be my babies and my sunshine no matter how old they are.

They, my three sons are all growing up. I hold my memories like diamonds and each one makes me smile. I am learning to parent men, and a teen. It is different. It reminds me to work on myself and become who I need to be, but I am not going to lie, while it is what I want, it is beautiful and sad and hard. I miss the times we would snuggle to watch Cinderella and I had all the answers. I was the one to ask. I am lucky if I get one phone call a week. It is what I said I wanted.  I am happy they are growing and becoming their own people. I am SO very proud of all of them. 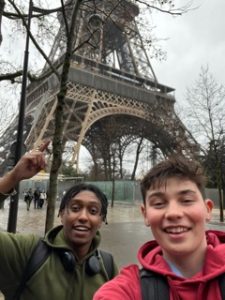 While picking something up at the store my son Josh, saw his friend’s sister. She was excited about her upcoming wedding in India. Josh asked if he was invited. Sure, she said. And he was. Some of his best friends and Josh were invited to attend the six-day long wedding in India. Josh worked hard with his friends coordinating the times of flights, immunizations, and passports needed for the trip.

“Okay.” I have never been to other countries apart from Canada.

I received a call from him the day he landed in Paris. Josh facetimed us Me, his dad, Michael, Sam and Alex. We got to see the Eiffel tower with a view we had not ever seen I was so excited! 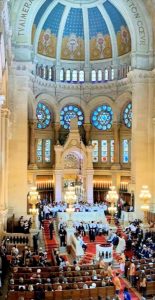 Josh found a synagogue called Grand Synagogue of Paris. He found a way to show his passport and speak a few words in French to allow him entrance. To his delight, they had a service, and he was invited on the bimah to read a prayer. The prayer book was in French and Hebrew, but the men shared a transliterated version of the prayer he could read. This was the most incredible synagogue he ever saw; he would tell me.

The photos of his time in India came, like digital postcards each one carrying the bond of friendship, learning about others, and the beauty. Oh, the beauty. I loved and posted each one to my Instagram feed and Facebook Page. I wanted to preserve them as proof of Josh’s, courage, humanity, and love for friends. It makes my heart happy to think of all he did to prepare for this trip and his ability to enjoy it.

One favorite shot was in the McDonalds with his friend. Dylan. It is in Ahmadabad India. Josh explained that cows are holy there. They do not have hamburgers. When cows stop giving milk, they let them roam the streets hence the photo of cows crossing as they were driving down the road. How interesting! I wonder if the cancer rate is lower without beef.

India is magical and through Josh I learned of very poor people, and children on the road. The dogs, so many dogs, some without a home or food. I wonder how I would never have known all of this if Josh had not gone to India.

This site uses Akismet to reduce spam. Learn how your comment data is processed.